The five phases of Outlaw's deal flow pipeline are flexible and dynamic -- they track your progress and help you understand where a deal is at, but don't lock you into a rigid set of pre-determined steps.

Deals may move backward and forward in the pipeline, and you can use all of the features of the contract review environment during most deal phases, except for E-signing which is only available when the contract is ready for signature.

Setup begins when a new contract is generated. 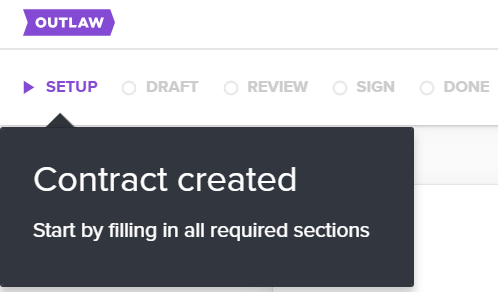 In Setup phase, fill in the click-able blue fields, which are called elements.

The contract will remain in Setup until all elements are filled, and will move backward to Setup if any elements become "open" (unfilled) at any time during the deal process. Sections that have open elements are flagged with blue task tabs to show where information still needs to be filled in:

The deal will leave Setup phase once all elements are filled. However, you don't have to complete Setup to use other features of the contract review environment such as editing and sharing -- these can be used at any time! The only feature that is not available in Setup phase is e-signature since the deal can't be signed if information is missing.

At the beginning of this phase you are prompted to share the contract, and the phase ends when you have done so.

Frequently Draft phase will be skipped over, if you have already shared the contract with another user during the Setup phase. This doesn't have to be the counterparty; it could be someone on your team. 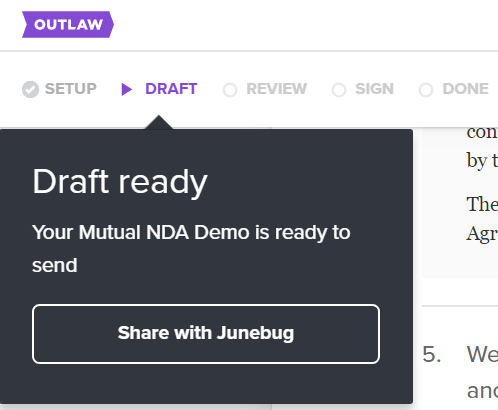 Contracts can be shared at any time in the deal process by opening the Manage User's panel found at upper right of the contract screen: 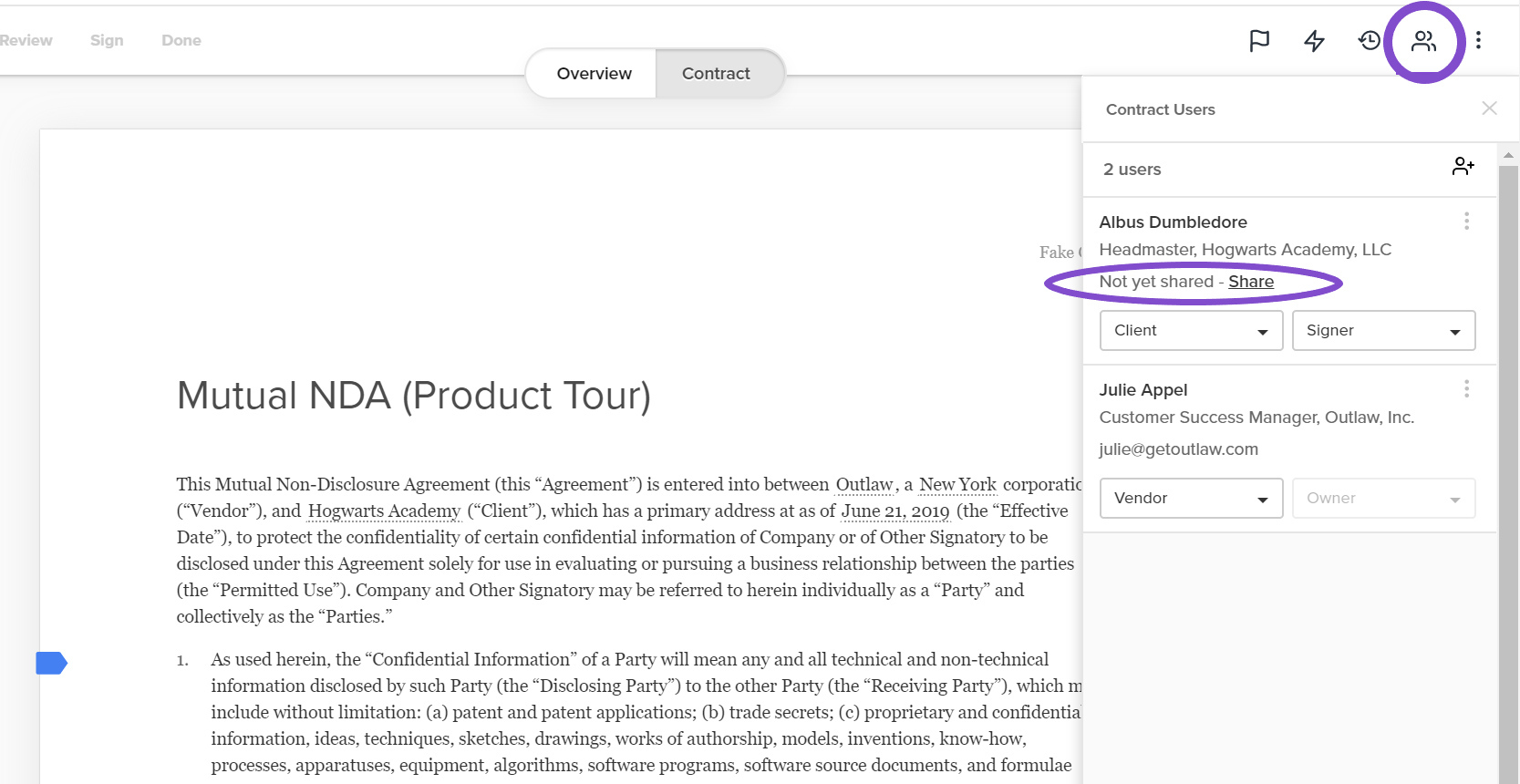 After the contract is shared for the first time, it proceeds to Phase 3 (Review) and will not re-enter Draft again. 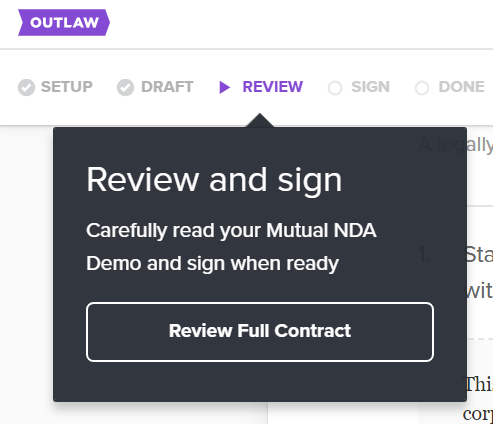 Once a contract has been shared it enters Review phase, in which users are prompted to "review full contract." If an overview is present, users must click on "Contract" at top center to view the full legal document:

Once users have reviewed the full contract, they are prompted to sign.  If parties are happy with the document as-is, they can immediately move on to Phase 4 (Sign).

If the document requires changes prior to signing, users can take advantage of in-platform negotiation tools such as red-lining (editing with tracked changes) to modify the agreement until it is acceptable to all parties.

Once all edits or comments introduced during Review phase have been resolved, parties may sign the document by tapping the signature box and e-signing with touch screen or keyboard. 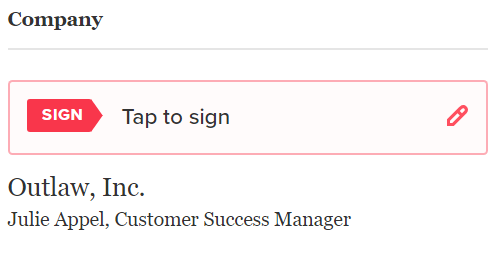 Each signature box indicates "awaiting signature" until all parties have signed. Parties will be notified via email as signatures are added. 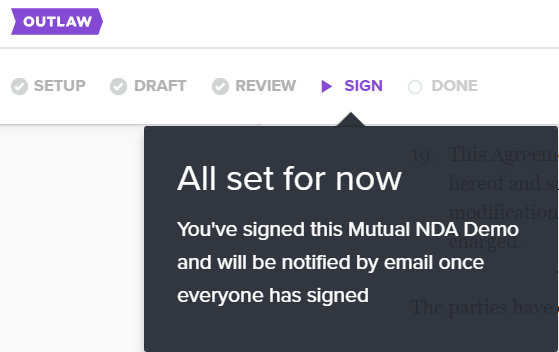 If one party signs the deal but it turns out further revision is necessary, a signer may clear their own signature before the contract is fully executed by clicking "Actions" next to their name:

Clearing signatures returns the contract back to Review phase for continued editing.

Once all parties have signed, the contract is "Done."  At this point, the agreement is a legal document and cannot move backward. 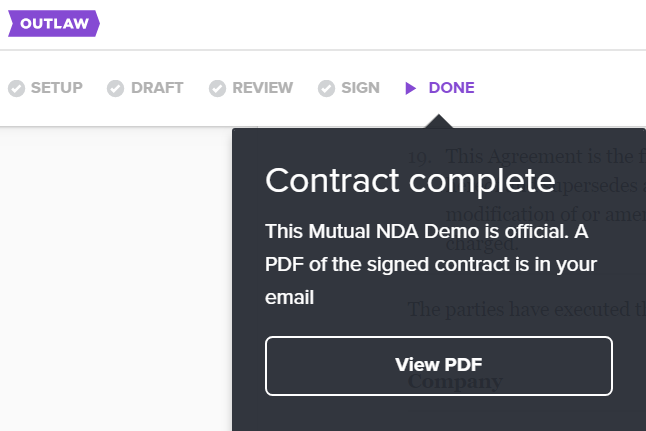 All parties receive an email notifying them of the completed agreement, including a PDF attachment of the signed contract.  The signed document remains in users' Contracts tab indefinitely, or until archived.