"Secrets" are a type of "element" (dynamic fill-able field) that can be added to a contract template. This article describes what is unique about Secrets; to learn about elements in general, check out this article.

Secrets encrypt sensitive information a party wants to remain private until a contract is done (signed by all parties), such as bank account and credit/debit card numbers.

How do Secrets work?

Once the assigned party fills in a Secret, it will appear to all users as a series of dots, like this:

If a user not from the assigned party attempts to view and/or edit its contents, they will not be able to, and will see the following message: 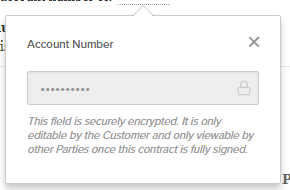 Users who are associated with the assigned party can click on the Secret to view and edit the information: 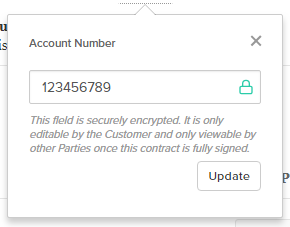 When the contract is complete

After a contract is signed by everyone on the deal, the contents of a Secret is visible to all parties.

Note:  Secrets are only visible when viewing a complete contract on Outlaw's platform.  In PDF versions of a contract this information will continue to appear as encrypted (a series of dots), adding an additional layer of privacy and security for sensitive information.